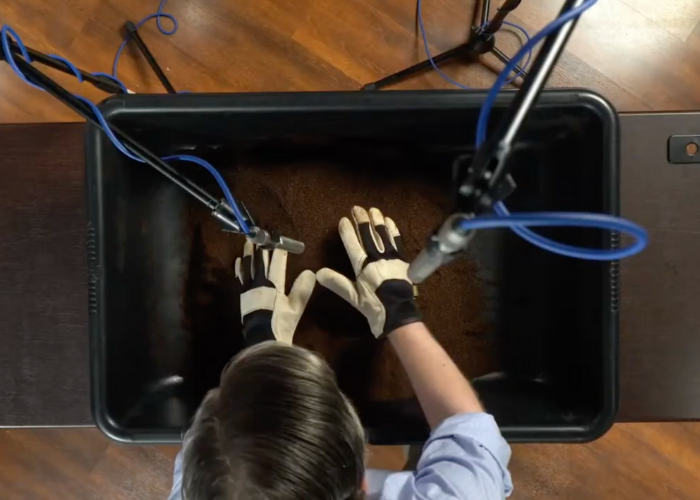 Have you ever wanted a peek behind the curtain to see how sound effects are created for your favorite films?

When you're sitting back, munching on popcorn, and fully entranced in a film, some foley creations are hard to imagine. And that's the way it is supposed to be!

You may be surprised to discover:

We're going to be following an example throughout this article to elaborate on some of the unique foley creation tips and techniques. We'll be guided by AIMM instructor, James Singer.

James has been in the film industry for over a decade, working on location sound, sound design, and even the final mixdown. So, let's ask the question; what exactly is foley?

However, you can't overlook the otherwise mundane sounds in our world, and subsequently, in films. This can include characters picking up an object, setting an object down, and even footsteps across a room.

For today's video and accompanying text, we are going to focus on a short scene where a character wakes up in the middle of a desert, stands up, brushes the sand off of his body, and runs off-screen.

To create foley for this scene, James is using:

More often than not, most foley sets will have two to four-foot pits built into the floor that are filled with various materials. Common materials include dirt, sand, coffee grounds, water, and gravel.

Then, you can also place surfaces over these pits to create additional foley sound effects, such as vinyl, wood, cement, etc.

Typically, the foley team will consist of about four individuals. This team includes: An example of this mindset is when you see a gun being cocked in a film. You'd be surprised to see that behind the scenes, the Foley Artist actually used a wrench in post-production to create that sound.

If you're feeling at this point that you'll never be able to watch movies the same way again, you're probably right. But that is truly the art of creating foley, and as we mentioned, the professionals make the sound effects indistinguishable from what you see on-screen. Here is the video clip example that James will be adding foley to. It is from AVID Agent MX-Z3RO. While we watch the video clip, James points out the sound effects that will need to be created.

The Methods to Capture Foley Let's break down some of the actions listed above and discuss how James will create the foley for them.

The Character's Face Rubbing Against the Ground

As you would likely suspect, James will simply rub his hand across the top of the mound of coffee to replicate this sound.

James will produce the cough himself and this will be picked up in the further away mic.

Just simply squeezing the coffee will be the effect we need.

To replicate these sounds, James will gently pat on the mound of coffee. For the character's big push off the ground, James will push a little bit more dramatically into the coffee grounds with both hands.

James will wipe his gloves together to simulate the sound of the character brushing sand off of their body.

For the character's jogging, James will put more weight into his pats and drag his palms across the coffee grounds to give the steps a little bit more of an exaggerating "push off" quality. Now that we know the scene, understand the sound effects James needs to capture, and exactly how he is going to do it, let's watch James create the foley sound effects.

Diagnosing the Most Noticeable Transients

Now that James completed a take at capturing Foley, he's going to work with his Foley Engineer, Keith, to listen back to the larger transients and see if they should choose:

Tip: When the Foley Artist is done, the audio is passed along to another sound designer to mix the foley with additional sounds that are often pulled from libraries. This is where those explosions and car chases we mentioned earlier tend to come from.

Why Can't All Sounds Be Pulled From a Library?

As you can see in the video examples above, certain sounds are so meticulous that they can't be pulled from a library as a generic sound.

Specific amount of steps, intricate actions, and the right amount of exaggeration are all contributing factors as to why a Foley Artist is needed to capture sound effects that are native to the specifications the shot calls for. At this point, the Foley Artist would move onto the next scene. However, for the scope of this example, we want to give you a sneak peek at what a sound designer might do with this clip.

For this clip, James is bringing in a background/ambiance track.

When the foley sound effects fade in and out, the natural noise floor of the room James is recording in will dip out, so having background sounds to cover up that silence helps alleviate any distractions an audience may experience. Background sounds also help ground the viewer in the scene.

Tip: You never want foley or additional library sound effects to play over top of one another. The same can be said for dialogue. If you think about the sounds as a pyramid, dialogue should be on top, followed by foley and sound effects, and finally, background and music should be the base of the pyramid.

Let's watch everything we've learned come together in the final clip! Learn More From James Himself

If you're interested in attending a post-production college, the Atlanta Institute of Music and Media is perfect for you.

Our Music Production and Audio for Media Associate Degree covers valuable post-production courses, such as:

Immerse yourself in a learning environment with industry-leading instructors. There is no better place to master your craft than AIMM.

Click the button below to discover more ways that AIMM can benefit your career today.

How to Increase Your Vocal Range | Tips and Suggestions